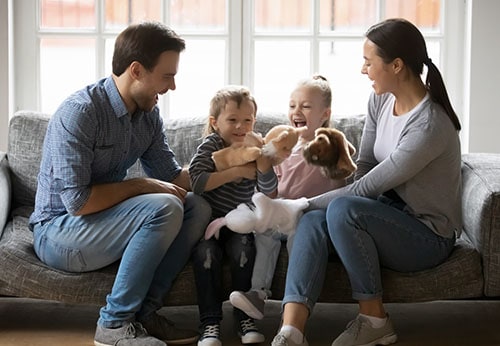 If you just ran off and had kids with someone and then found out later they were a totally different religion with totally different views on education and medical care, you screwed up. If you can’t reach common ground after the fact, you’re eventually going to get to a point where one parent is the decision-making and the other parent gets some input (or possibly no input) on those decisions. Who will the decision-maker be? It depends on who the court decides has the child’s best interests at heart.

The rest of it really isn’t too complex. Everyone’s got their own parenting style, so you don’t need to be on the same page about little things. But you do need to be on the same page about enforcing discipline. So, if your kid got in trouble at mom’s house because they threw a brick at someone, you don’t want to take them to your house and say, “Good job throwing that brick, here’s some ice cream,” because then you’re undermining a parental relationship and you’re undermining the other parent’s discipline, and you’re just going to get into a bad co-parenting situation.

Focus on the big four, and if you’re on the same page about that, the other stuff, you can have little disagreements about as long as you’re not undermining each other’s authority. But if you have big disagreements about those big four issues, you shouldn’t have had that kid with someone that you so clearly disagreed with about everything, and you’re going to have to either find a way to compromise or you should prepare for the court to decide that one parent is ultimately going to be the decision-maker.

It’s critical for two reasons. The first reason it’s critical is because obviously you’ve got to communicate with this person to make decisions about your kid. The other reason it’s critical is because kids don’t spend all their time with the other parent preparing a status report for you. They’re living a kid’s life and having a kid’s experiences, and they sometimes need an adult to tell the other adult what’s happening in their life.

Good dad is going to know about what’s going on with their kid because they’re going to have that communication, and they won’t just be communicating with the other parent about decisions. They’re going to be communicating about everything significant that happened in their kid’s life and they won’t miss anything. Whereas bad dad’s going to be sitting there and six months after the fact, they’re going to find out that their kid has a girlfriend or some other significant event. The kid’s not going to write down every detail to give it to you and you will miss out on parts of your kid’s life because you choose not to have that communication.