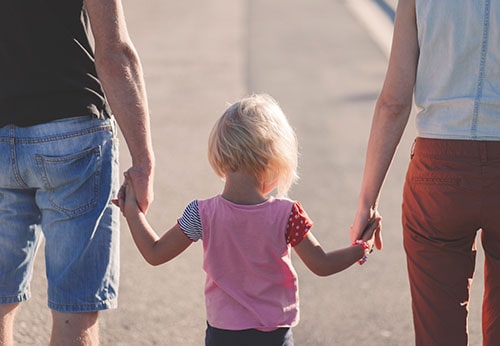 In our typical court orders, we see that the parents are supposed to encourage love and respect between a child and their other parent, and that’s a good way to approach it. Good dad is going to tell them, “This is your mom, and I expect you to love them like you love me, and I expect you to obey them when you’re with them,” and they’re going to keep that other parent at the same level that they certainly hope that other parent is keeping them at. That’s important because that keeps the co-parenting relationship going.

The bad dad though is always going to be talking bad about the other parent and sometimes they’ll do it in a way where they’ll pretend they thought the kid couldn’t hear them, but they clearly knew otherwise. Or they’ll tell the kid things about mom and they’ll try to put it in a way that it doesn’t sound bad, but it’ll start negatively chipping away at that kid’s relationship with mom, and the problem you run into is kids aren’t stupid. They have their own opinion of each of their parents. If you start trying to change that opinion and trying to destroy the relationship that they’ve established with that parent, they’re going to notice, and it’s honestly going to make them dislike you, and it’s going to make them talk to the other parent about it, creating a conflict. You need to be able to let your kid be smart enough to think for themselves and not try to shove your opinions into their head. If the other parent really is bad, your kid is going to figure that out for themselves as some point; they don’t need you to spoon feed that opinion to them.

When we think about a positive co-parenting relationship, we really do think about co-parenting. The parents are working together, they’re communicating, they’re making decisions together, they’re keeping each other informed; that’s what co-parenting is, and that’s what good dad engages in. They work together with mom, they talk to mom about what’s going on in the kid’s life, they talk about decisions and why they think certain decisions should be made for a kid, and they reach those decisions together based on what’s best for their kid. They’re willing to hear mom out, and willing to change their mind if mom’s proposal makes more sense and is better for their kid. Obviously, we expect mom to do the same thing!

What bad dad does is something that’s not co-parenting; it’s parallel parenting, and it involves “I’m going to do this at my house; this isn’t mom’s house, and in this house, we’re doing it my way.” They don’t communicate a lot, and when they do, it’s very rare, and it’s probably antagonistic. When they get to decisions, they often aren’t able to cooperate and make them together, which often leads parties back into court for the court to give someone a final decision-making authority, because otherwise, no decisions are getting made. The simple fact is this: if the parents always argue and can never agree, they are absolutely going to end up back in court at some point.

The Expectations That A Father Should Have For Co-Parenting

What you should be thinking about is what can I do to make things as good as possible for my kid, knowing I have to communicate with this other person, and we have to reach a consensus about it because they have just as many rights as I do.